As of May 8, 2020, the official Instagram account has 768 followers, an increase of 248 followers since January 31, 2020. This is the biggest increase in followers in a quarter since the launch of the department’s Instagram. The most liked picture during this 98-day period was a congratulatory post for Drs. Balthazar, Meltzer, and Tigges who all received AUR award recognitions this year. It received 62 likes, was the most liked post in April, and is also currently the most liked photo overall on our Instagram page. 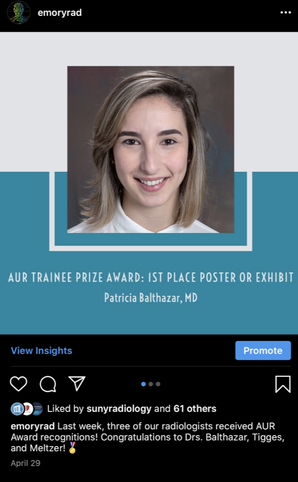 The most liked post in March was our Match Day congratulatory post for our new residents. It received 53 likes.

​The most liked post in February was a post of four campus shots: Emory University Hospital Tower, Emory University Hospital, the School of Medicine, and the new student center. It received 52 likes.
The official Emory Radiology Twitter account has 3,606 followers. Between January 31, 2020 and May 8, 2020, we received 291 new followers and more than 237,000 impressions.

The top tweet during this period was a congratulatory post for Dr. Mark Mullins who received the 2020 ARRS Distinguished Educator Award. It received 9 retweets, 126 likes, 13,942 impressions, and 405 total engagements. It was also the top tweet for April. 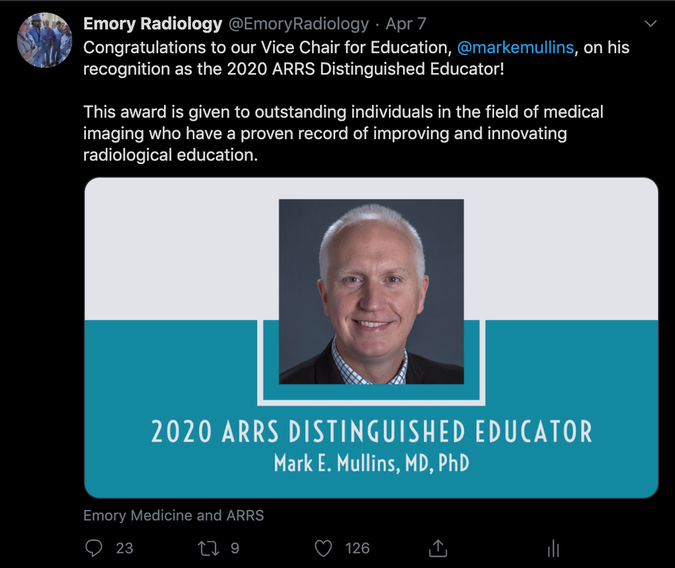 The top tweet in March was from Match Day. It received 1 retweet, 41 likes, 6,349 impressions, and 127 total engagements.

The top tweet in February was from our annual medical school symposium. It received 6 retweets, 42 likes, 5,601 impressions, and 115 total engagements.
Twitter impressions are the total number of times the tweet was seen. This includes the times it appears on followers’ timelines, in a Twitter search, or as a result of someone liking the tweet. Twitter engagements are the total number of times people interact with the tweet. It includes clicking on links, visiting the tweeter’s profile, replies, retweets, likes, clicking on embedded media, or simply clicking the tweet.