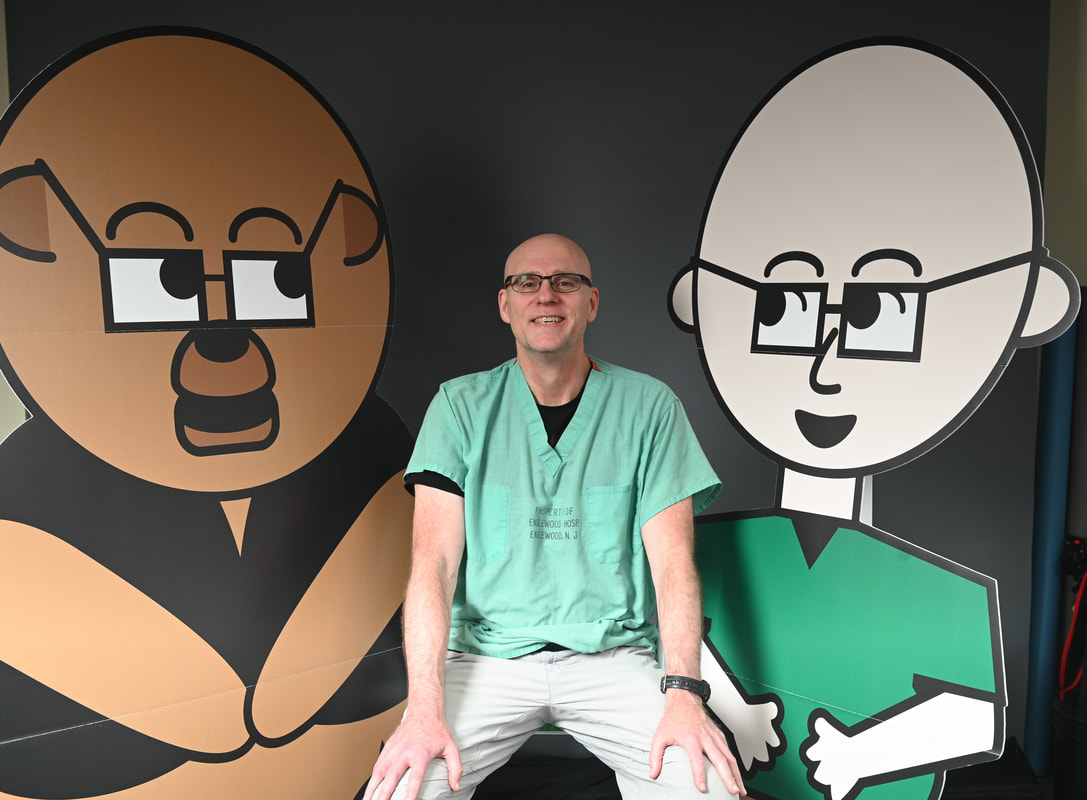 "Is that Dr. Tigges? Oh my God, I love him!" squeals Jenny Nguyen, second-year medical imaging student. She points to a six-foot tall cutout character with an outsized Charlie Brown round head, square spectacles, and flat, angular body. 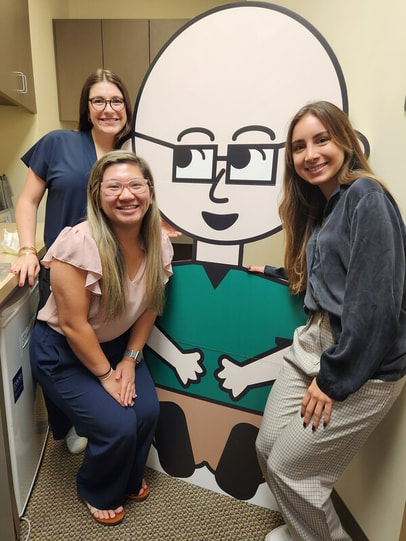 Jenny, Kalina Machado, and Mariana Sanchez-Media, all working toward a bachelor of medical science degree in the department's Medical Imaging Program, forget about the headshots they're here to take. Thrusting their phones at us, they crowd around the character.

Photos snapped, they want to know about Papa, but first, we want to know how they know Stefan Tigges, MD, FACR, an associate professor of radiology and imaging sciences in the Division of Cardiothoracic Imaging.

"He taught us anatomy," Jenny says. "He's an awesome teacher! I was nervous about it, but he made it fun and not scary." Kalina and Mariana nod in vigorous agreement.
Everyone loves Dr. Tigges. Well, almost everyone.

"There's a group of people who don't like the way I teach with the comics," he says when we shoehorn ourselves into his packed schedule for a chat.

That's hard to believe, given that he has more than 17,000 followers on Twitter who love his "How to Read a (insert imaging study type here)" series which is housed on Radiopaedia and which he promotes on Twitter. It's also hard to believe given the number of awards he's received for his teaching, including being voted one of two finalists for The Minnies 2022 Best Radiology Educator award.

For Dr. Tigges, it's simple: "They think I'm taking away some of the mystique that comes with being a physician because I'm making complex concepts simple to understand."

His own struggles with learning inspired Dr. Tigges to find another way to teach.  “I foolishly volunteered to teach evidence-based medicine—I was terrible at it in med school—when I had to relearn it for a master’s degree,” he says. “I thought the way it was being taught was too difficult. I always liked comics and thought dialogue was a good way of learning, so I started drawing characters talking to each other about the concepts I was teaching."

His goal: to make lessons as simple as possible. . . and entertaining. He's succeeded on both fronts.

The characters are simple, too.

"When I first started doing comics, I had Squirrel and Cat; they were based on me and my daughter, whose nickname is the The Cat. When my daughter went to college, I started looking for new character ideas. 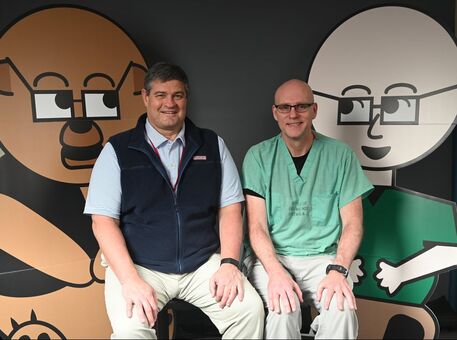 Dr. Eugene Berkowitz, aka Papa Bear, with Dr. Stefan Tigges, aka Papa
He didn’t have to look far. “The person I was closest to in our section is Eugene (Berkowitz, MD, PhD, associate professor). During the first wave of the (COVID-19) pandemic, when the place was empty, we were there every day in person reading a crazy amount of chest studies. We worked together so much, we would finish each other’s sentences and so it seemed like a natural thing to make us characters.  Eugene is just a sweet-natured person and really, really smart; I rely on him to explain things to me.”

Dr. Tigges drew further inspiration from Calvin and Hobbes, the award-winning cartoon strip Bill Watterson launched in 1985 and drew until 1995.

“I love Calvin and Hobbes and thought I could piggyback on their vibe in that my character, Papa, really is like a little kid and Papa Bear, who looks like my son’s old teddy bear, is his wise sidekick who does most of the explaining.” He chuckles because he still reserves statistics and evidence-based medicine lessons for himself. “Papa does the explaining on those.” 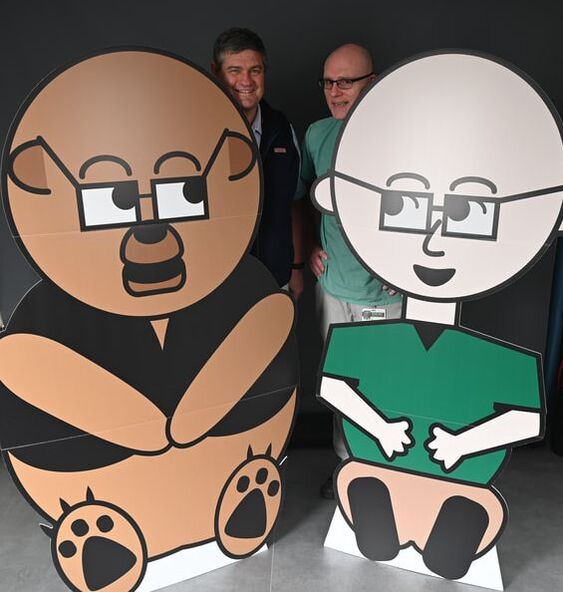 While the goal of the cartoons has always been to make learning easier and more fun, the inspiration has changed a bit, and that reveals something deeper about the artist.

“Most of what I draw now with Papa and Papa Bear is based on the nature of our relationship. Eugene doesn’t make concrete suggestions for the comics, but he does review them, and I put in jokes only he would get. That’s the kind of relationship and comfort level we have with each other.”

For his part, Dr. Berkowitz fully embraces being Papa Bear. So does his family: “We’re all bears now: I’m Papa Bear, my wife is Mama Bear, and my daughter, who is a student here at Emory, is Baby Bear.” 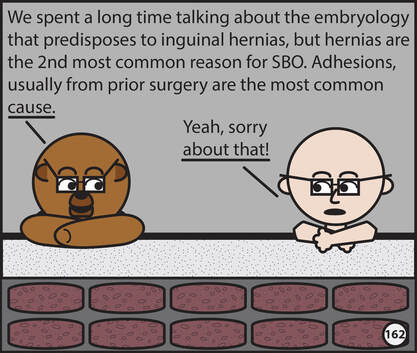 Dr. Tigges has devoted much of his career to medical education. He served as the director of the third-year medical student radiology rotation from 2011 to 202, and from 2014 until earlier this year, he also led the first-year anatomy course in the Emory School of Medicine. That’s on top of an ever-increasing clinical caseload in cardiothoracic imaging.

“It’s time to step back and recharge myself,” he says. “It’s also time to let others step in and make their own mark on medical education. Smyrna (that’s Smyrna Tuburan, MD, assistant professor of radiology) is doing a great job with the third-year rotation and there are plenty of great people in the School of Medicine to run with the anatomy course and make it their own.”

Dr. Tigges is not stepping back from comics, even though as his online audience has grown, so, too, have the stakes.

“The more potential impact you have on teaching, the more careful you have to be. I try to get it right. I’ve made some pretty bad mistakes, but on Twitter at least there are people who will gently and kindly correct me. For example, I made a series about brain hemorrhages and put the dura mater in the wrong place. A very kind neurosurgeon from England pointed it out for me. Most interactions I’ve had are very kind and friendly and joyful.” 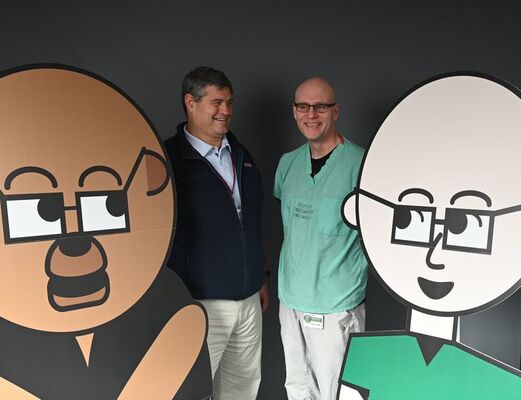 We return to the detractors: not everyone shares Dr. Tigges’ commitment to making medical education fun.

“The evidence-based medicine series people thought I was trivializing or making fun of them, but the opposite was true. I worked really hard to make things easy and understandable. It’s easier to present complex things in a complex way than to simplify the complex. I’m saying what you’re doing is so important, I am going to work very hard to make it as simple as possible. In a similar vein, some medical students say I made things too simple as a complaint. But simplicity is not a bad thing.”

Dr. Tigges points to his biggest comic influence as proof: “Peanuts was spare and simple in terms of the drawings and yet it powerfully tackled sophisticated topics. I wanted to capture some of that, in terms of style.”

To keep his drawing fresh, Dr. Tigges visits the Center for Cartoon Studies in Vermont every year. “Every year I learn something new. A piece on appendicitis that I hand drew while I was there will be incorporated into my comic on "How to Read an Abdominal CT.” 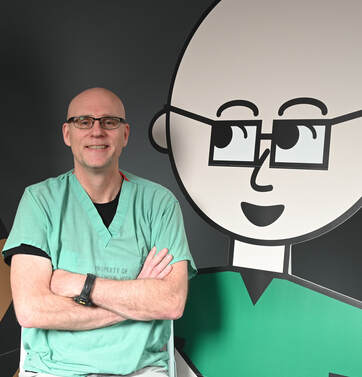 on art has given him more than a means to reach more learners. He’s also gained a community of like-minded medical artists.

“When I started doing comics for medical students, I thought no one else was doing it. But I discovered there are others who have done it first and better. There’s even a society called Graphic Medicine. There’s a lot of love and support from people who do this thing.”

Loving and supportive. Kind. Joyful. Prizing simplicity. Radiating positivity. Hard work to make others’ work easier. As we wrap up our conversation, I realize Dr. Tigges hasn’t been talking about medical comics as much as he’s been drawing a self-portrait, and his complexity is simply beautiful.
Home