Getting to know dr. jamlik-omari johnson
by mohsina yusuf 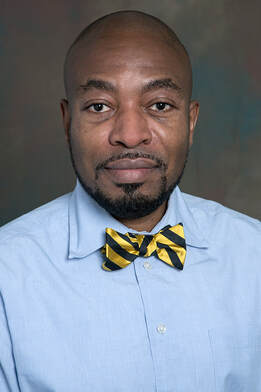 Meet Dr. Jamlik-Omari Johnson: the founding director of the Division of Emergency and Trauma Imaging and the chief of Radiology and Imaging Sciences at Emory Midtown.

Dr. Johnson has been at Emory 10 years. He was first recruited to Emory back in 2010. At the time, he was a senior staff radiologist at Massachusetts General Hospital and initially intended to return to New York City, but he was drawn to the Emory culture and the possibility of growing something meaningful. Plus, it helped that Atlanta had warmer weather, especially considering all his education and training was completed up north.

He received his bachelor’s degree in healthcare organization and policy from Brown University, where he graduated with honors. He completed his medical degree from the University of Pennsylvania and did his post-doc training at Columbia University. During university, he worked as an on-air DJ and did voice-over work, primarily in commercials. He credits this to his effectiveness because good leaders listen.

He was drawn to radiology late in his medical school career. He early-matched in urology when he took his only radiology elective and he was surprised at how engaging and dynamic the field of radiology is. He shrugged it off at first, but it wasn’t until his surgical internship that he realized radiology was the better fit. He made the transition and hasn’t looked back since.

Since the pandemic, his number of meetings has significantly increased and there’s lots of problem solving related to preparation, response, and recovery efforts—not that he minds. He considers problem solving the most rewarding part of his job.

In his clinical work, Dr. Johnson dually helps patients and providers. Emergency patients come to Emory or Grady with a problem, and our providers entrust patients to our team to help solve the problem with greater insight—literally. These interpretations and consultations guide care and are an important cornerstone of patient care.

In his administrative roles, he operationalizes our collective organizational mission and mission: strategic forecasting and planning, connecting people with resources, and bridging interpersonal gaps. In his research, he investigates many of the challenges and realities he faces.

While the problem solving aspect is constant, each day is different and no two days are the same. Surprisingly, he finds that his clinical days are the calmest and most predictable part of his week.

Dr. Johnson loves the opportunity he gets to engage with trainees and is always inspired by his colleagues. Our division covers five emergency departments across the Emory and Grady system, so he’s used to seeing both the ordinary and extraordinary.

“The body only knows a few responses to being ejected from a car at 70 mph, but provider’s reactions are more variable,” he explained. “Interpreting those predictable findings has cadence, and each consultation with a provider is uniquely satisfying. Each report or consult is a problem solved. Creating a cadence in my administrative space is a different challenge and requires a different set of tools.”

When he’s not working, he enjoys traveling. Prior to the pandemic it was his active passion and now that it (temporarily) has come to a stop, he is working on his tennis skills and is always up for a friendly match. He also enjoys cycling on the Beltline early in the morning before the crowds or on the Silver Comet trail on the weekends.

Dr. Johnson shares that the feeling of home is what keeps him at Emory and in Atlanta.

“This is my longest tenure,” he shared. “I was drawn by the culture, and it has kept me here. I work with the best group of people. The work is meaningful and rewarding. We strive to be better than we are, and I am encouraged by our trajectory.”
previous page