by Mohsina Yusuf
Emory Radiology's Instagram has officially been active for over a year, with our one-year anniversary on September 4. We gained more than 1,000 followers in less than a year. As of December 10, 2020, we currently have 1,219 followers, an increase of 205 followers since our last quarterly update on August 14.

During this period, we received an average of 49 likes, and some posts gained additional audiences after being re-shared by the Emory University School of Medicine.

Our most liked post during this period was a series of comics from Dr. Stefan Tigges as part of our department’s #WeSeeYou social media campaign. It received 61 likes and was the most liked post in September. 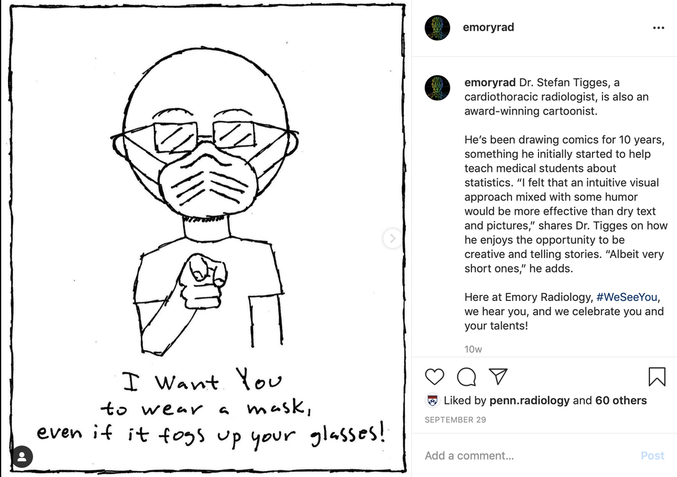 Our most liked post in the second-half of August was a post sharing photos of our faculty and staff wearing masks across our different campuses. It received 60 likes. 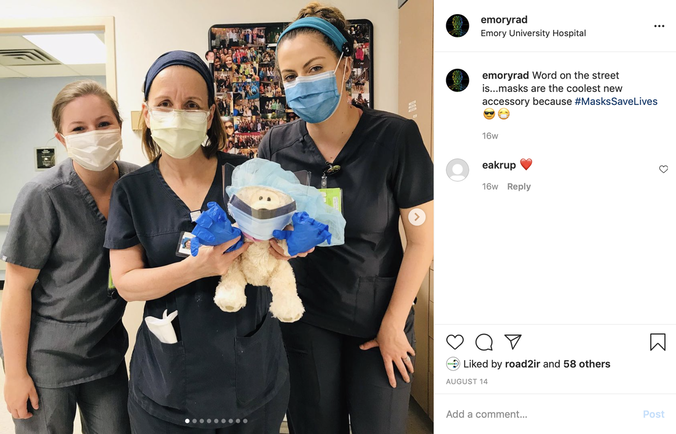 The most liked post in October (left) was about our Vice Chair for Imaging Informatics Dr. Nabile Safdar as part of our #WeSeeYou campaign. It received 53 likes and was re-shared by the Emory University School of Medicine.

The most liked post in November (right) was a collage shared during Radiology Week. It received 57 likes.
Emory Radiology’s Twitter account has been performing exceptionally well since our last update on August 14. Emory Radiology has earned more than 206,700 Twitter impressions in the past quarter. As of December 10, we currently have 4,453 followers, an increase of 449 followers since our last quarterly update. This is also the largest increase in followers during a quarter this year.

Our top tweet during this period was a promotional post on our department’s virtual open house back in August. It received 34 retweets, 52 likes, 11,972 impressions, 755 engagements, and had an engagement rate of 6.3%. It was also the top tweet for August.

Our top tweet in September was a tweet thread on our department's Aunt Minnie recognitions. It received 8 combined retweets, 28 combined likes, 5,788 impressions, 214 engagements, and had an engagement rate of 3.7% 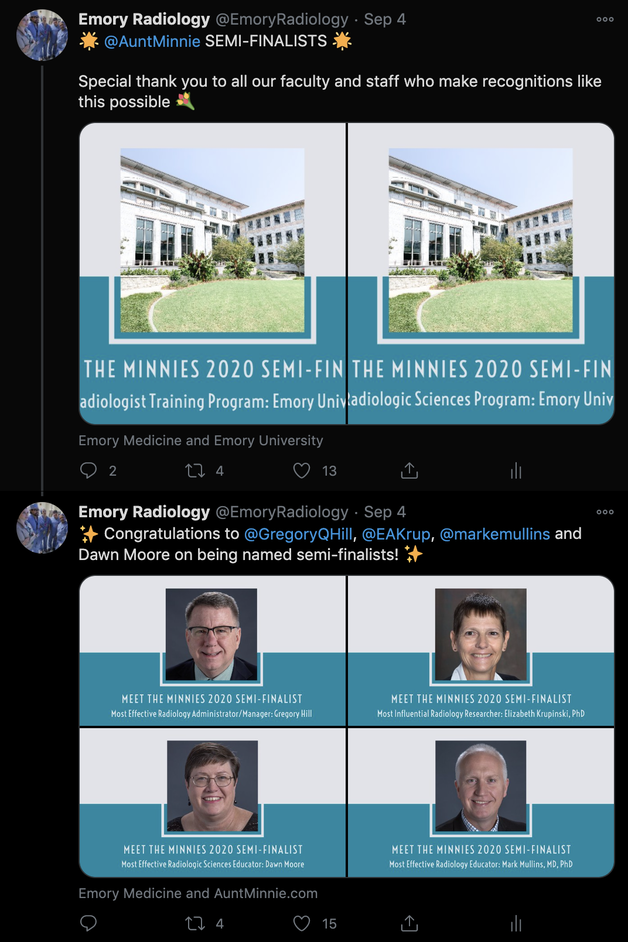 Our top tweet in October was our congratulatory tweet for Dr. Elizabeth Krupinski after she was recognized as the Most Influential Radiology Researcher by Aunt Minnie. It received 6 retweets, 47 likes, 6,615 impressions, 151 engagements, and had a 2.3% engagement rate. 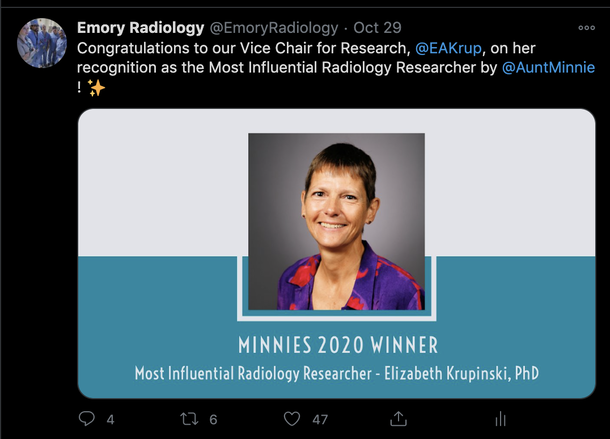 Our top tweet in November (left) was our congratulatory tweet for Dr. Mark Mullins after being named the recipient of the Outstanding Educator Award by the American Roentgen Ray Society (ARRS). It received 8 retweets, 45 likes, 6,174 impressions, 147 engagements, and had an engagement rate of 2.4%.

So far, our top tweet in December (right) is a tweet during this year’s virtual RSNA annual meeting. It received 2 likes, 34 retweets, 5,879 impressions, 386 engagements, and had an engagement rate of 6.6%.
​Twitter impressions are the total number of times the tweet was seen. This includes the times it appears on followers’ timelines, in a Twitter search, or as a result of someone liking the tweet. Twitter engagements are the total number of times people interact with the tweet. It includes clicking on links, visiting the tweeter’s profile, replies, retweets, likes, clicking on embedded media, or simply clicking the tweet. A tweet thread is a series of connected tweets from the same account.