The past quarter has been full of social media milestones for the Department of Radiology and Imaging Sciences.

The official Instagram account hit 1,000 followers during the first week of August. As of August 14, 2020, we currently have 1,014 followers, an increase of 246 followers since our last quarterly update on May 8, 2020. Our Instagram account was launched in September 2019, which means our department hit this social media milestone in less than a year.

At 1,014 followers, we are in the top 25 most-followed Instagram accounts amongst all official Emory accounts, which includes student organizations, colleges, professional schools, programs, departments, and Emory Healthcare. 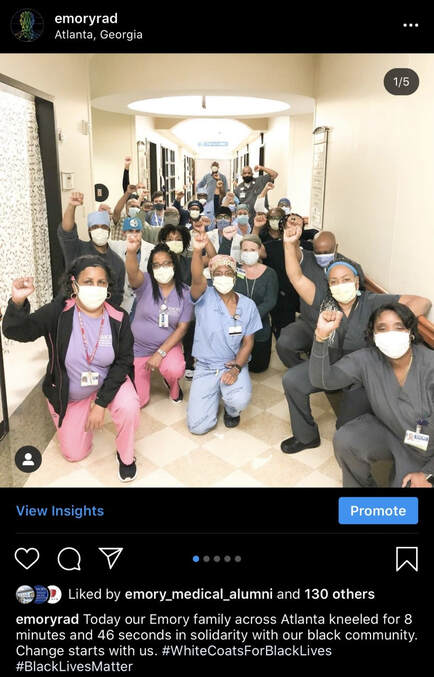 ​Our most liked post in July was a shot of Emory University Hospital shared from our photography archive. It received 55 likes.

​We also launched a social media campaign on August 3, 2020. Emory Radiology’s #WeSeeYou campaign is about celebrating the differences that make our department unique. It allows our faculty and staff to share our goals, interests, hobbies, passions, families and cultures while also providing the space on social media to have tough conversations—such as addressing stereotypes—without fear.

So far, our most liked post in August is from of our #WeSeeYou social media campaign. It received 59 likes.
​The official Emory Radiology Twitter account hit the 4,000-follower mark during the second week of August. As of August 14, we currently have 4,004 Twitter followers. Between May 8, 2020 and August 14, 2020, we received 398 new followers and more than 129,400 impressions during this 99-day period.

At 4,004 followers, Emory Radiology is in the top 3 nationally for most-followed radiology programs, surpassing schools such as Duke, Yale, Vanderbilt, Stanford, UCLA, and Johns Hopkins.

We are in the top 10 most-followed Twitters amongst all official Emory accounts and currently the second most-followed department in the Emory School of Medicine.

The top tweet during this last quarter was Dr. Meltzer’s recognition in Atlanta Magazine as one of 12 women selected as a 2020 “Women Making a Mark” honoree. It received 14 retweets, 75 likes, 7,482 impressions, and 451 engagements. It was also the top tweet in May. 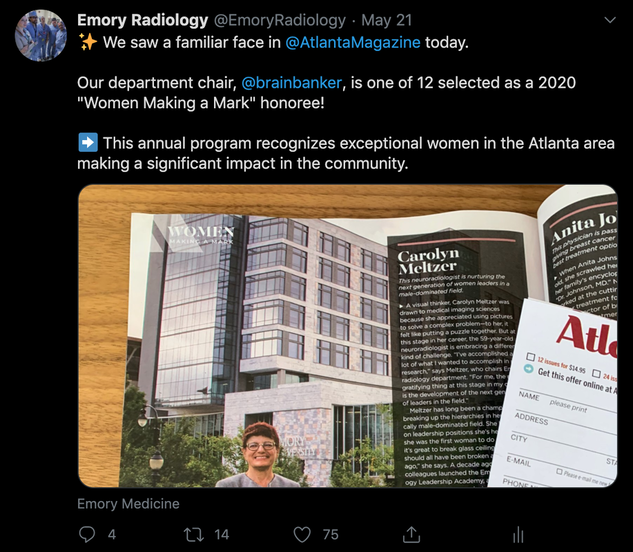 ​The top tweet in June was a welcome tweet for Dr. Merissa Harris. It received 2 retweets, 29 likes, 6,013 impressions, and 115 engagements. 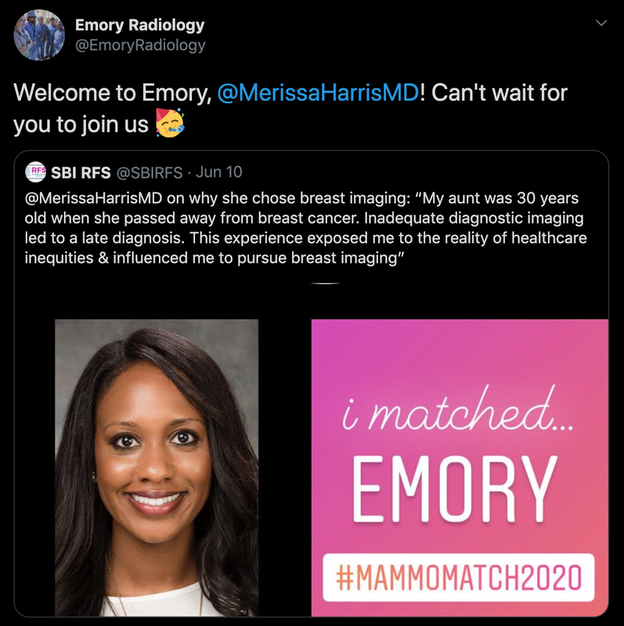 ​The top tweet in July was a quote retweet dedicated to Congressman John Lewis, who passed away last month. It received 1 retweet, 16 likes, 3,789 impressions, and 79 engagements.

So far, our top tweet in August is about our Emory radiologists who were named three of Atlanta’s Top Doctors in 2020 by Atlanta Magazine. It received 2 retweets, 21 likes, 2,336 impressions, and 147 engagements. 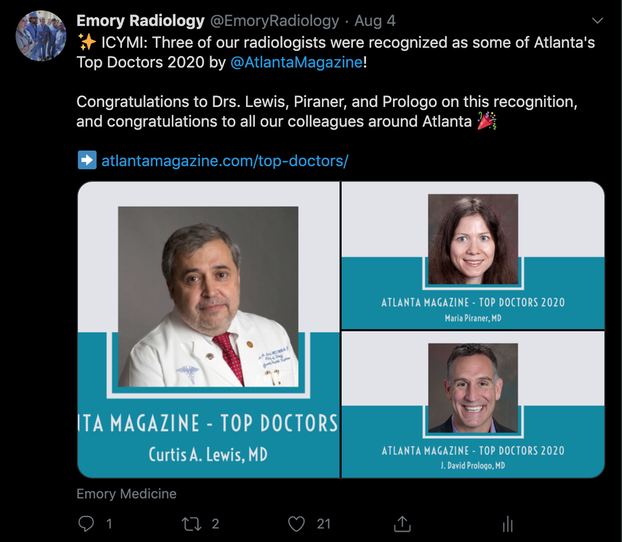